Where Did This Iconic Style Come From?

Buffalo Plaid has become an iconic design in American culture. Since its introduction, Buffalo Plaid was quickly adopted by the cowboys, lumberjacks, and outdoorsmen. As a result, Buffalo Plaid was embedded into the larger popular culture through such icons as Roy Rogers, Paul Bunyan, and even good ol’ Elmer Fudd. It was also famously worn by Tennessee's own U.S. Senator Lamar Alexander when he walked over 1,000 miles across the state in 1978, after which it became a signature part of his identity. Although it has been around for centuries, Buffalo Plaid is a pattern that has yet to lose favor. In fact, not only will you see it as a popular clothing style for 2018, you will also find it a lot of top lists for wrapping paper this year. Buffalo Plaid is not only a staple for the American sportsman, but a traditional look for all of rural and urban America.

But where did this popular style come from? Depending on who you ask, you might get a couple of different answers.

First – the history of the plaid flannel

Although there may be a couple different explanations as to the origins of Buffalo Plaid, the history of the plaid flannel is a little more straightforward, but we’ll break it down into two parts – the history of flannel, and the history of plaid.

The history of flannel

The popularity of flannel in outerwear is a gift that comes to us from Wales. The Welsh developed this fabric as early as the 16th century, and found that this weave of fabric performed better in the wet and windy conditions of winter than plain wool fabric. As it was adopted throughout Europe, it was referred to by the Germans as flanell, and by the French as flanelle.

The history of plaid

It may not be a surprise that plaid is a gift that comes to us from Scotland. If you imagine a Scottish kilt, you probably immediately think of plaid, or what they referred to as tartan. Throughout history, these unique patterns would indicate whether someone was from a specific region or a particular clan. Now, the history of the Buffalo Plaid

There are a couple of different ideas behind the history of Buffalo Plaid.

There are those that claim that the Buffalo Plaid is actually the Rob Roy MacGregor tartan, which according to the The Scottish Register of Tartans, is registered with the Highland Society of London for the year 1816, but presumably dates back to the early 1700’s.

A decedent of the MacGregor clan, Jock McCluskey, would later be attributed for introducing his clan’s tartan to America as the now famed Buffalo Plaid. Jock’s family name became McCluskey after the name MacGregor was outlawed for 150 years. To carry the name or wear the plaid was punishable not just by prison, but by death. The MacGregors melted into the highlands adopting other names and plaid patterns, and became know as “The Children of the Mist”. They changed their original plaid pattern to what we recognize today as the Buffalo Plaid.

The MacGregor plaid was even worn by a Scottsman in his kilt at The Alamo! John McGregor wore his colors and played his bagpipe during the final battle to help inspire the troops. It would be the last music that Davy Crockett and his boys would ever hear. You can even see him in a display at The Alamo today and read his story. 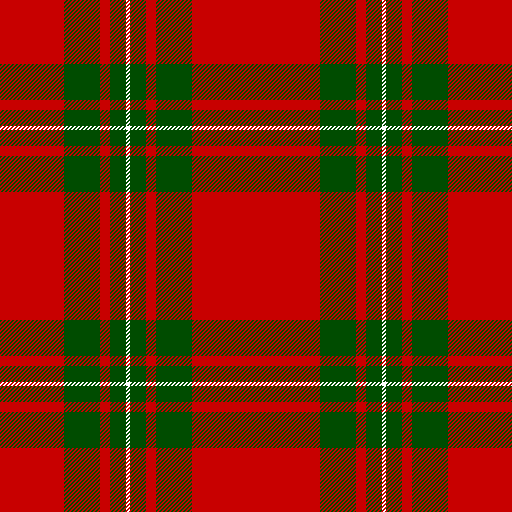 When Woolrich Woolen Mills introduced their version Buffalo Plaid in 1850, they made claim of its origin. The claim was that the original designer owned a herd of buffalo, which is why the pattern was named as such. The Buffalo Plaid is so ingrained in the Woolrich brand that it has been incorporated into their logo.

Since Woolrich Woolen Mills didn’t introduce their Buffalo Plaid until 1850, you may naturally assume that it couldn’t possibly be the origin if the Rob Roy MacGregor tartan existed long before the Woolrich pattern. But here is the problem – although the Rob Roy tartan existed before the Woolrich plaid, Jock McCluskey is typically not placed in America until after Battle of the Little Bighorn in 1876, which is after Woolrich would have introduced their Buffalo Plaid flannel shirt.

A Mixed-Up History, or a Battle of the Brands

One important aspect to consider may be how the Jock McCluskey origin story came into popularity. It seems to gained traction after the launch of the BrãeVal brand, whose founder was none other than Gregor McCluskey, who is the great-great nephew of Jock McCluskey. While the Jock McCluskey story has become more commonly accepted, it hasn’t been historically verified.

Maybe after Woolrich had introduced their version of the Buffalo Plaid, Jock McCluskey came to the American frontier pleasantly surprised to find that his familiar family tartan was an easy sell to the Native Americans and U.S. troops, and his trading further perpetuated the popularity of the pattern. Perhaps some version of both stories are true?

The Never-Ending Popularity of Plaid

Regardless of where Buffalo Plaid originated, one thing is certainly true – plaid is never going away. Can you imagine a quintessential American diner without imagining a check plaid tablecloth? How about a cozy cabin without a Buffalo Plaid blanket? It’s been a long-time favorite of outdoorsmen and sportsmen, but it’s also been adopted into the larger popular culture.

A 1960’s band named themselves The Pendletones, using reference to their musical tones along with their favorite plaid shirts, before later changing their name to The Beach Boys. You’ll notice them wearing their plaid flannels on early album covers. Country, folk, disco, punk, grunge, hip-hop – plaid seemed to sneak its way into the fashion of every musical movement.

Of course, today we’d rather wear our Buffalo Plaid amongst the pines than at the beach. And we still think this Buffalo Plaid is a solid choice, even if it’s a little dated by about 300 years.